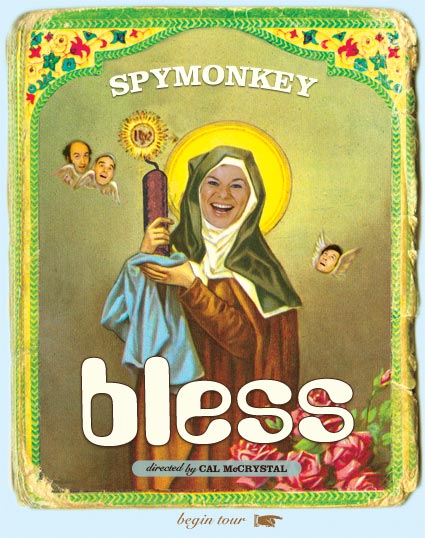 “Hallelujah for Spymonkey! The patron saints of lunacy” Canada.com

In Spring 2007 Spymonkey made BLESS, a miraculously divine revue about the lives of saints. Their third collaboration with writer/director Cal McCrystal, BLESS was previewed at the Ticino Theatre Switzerland, Newbury Corn Exchange and Gardner Centre Brighton before a beginning a three-week residency at the Big Secret Theatre, Calgary, a sell-out success. It won best comedy, best musical and best female performance at Calgary's Betty Mitchell Awards 2007.

Supported by the National Lottery through Arts Council of England

“Hallelujah for Spymonkey! The patron saints of lunacy” Canada.com

“With Bless, a dastardly backdoor examination of the men and women we now venerate as saints, Spymonkey completes the trilogy of hilarity it began with Stiff and continued with Cooped... They display their ingenuity by playing to each other's stregnths - Massey's over the top delivery tempers Basauri's understated comic timing. Bless's genius lies [in] bringing down the godly to a human level… to laugh at what we hold sacred – and still hold it sacred” FFWD Magazine

“A kind of European Union of funny... laugh-out-loud funny, smart funny. Spymonkey have created a demented variety show hosted by actor-turned-priest Father Forbes Murdston who hopes to help three career criminals achieve spriritual salvation by acting in a play that recreates their crimes in a variety of biblical scenes, saints, (deliberately) bad European variety show musical and video numbers, and a finale that slays some of the most popular conventions of experimental theatre…” Calgary Herald

“The highlight of the cast is Park, who displays his delightfully altruistic priest with equal measures of honesty and lucid sarcasm... both identifiable for his naivete and hilarious for his sincerity." FFWD Magazine

“There's hardly a dry eye in the house. The audience are helpless with laughter, but Spymonkey leave no time to catch breath between scenes. 'You couldn't ever put it into words, you just have to see it!' says an audience member after the show, wiping the tears from her face." Zurichsee Zeitung

Tony Murdston with some sage advice from the Christian Television Singers.

Scene created for BLESS, reimagined for Spymonkey's LOVE IN.