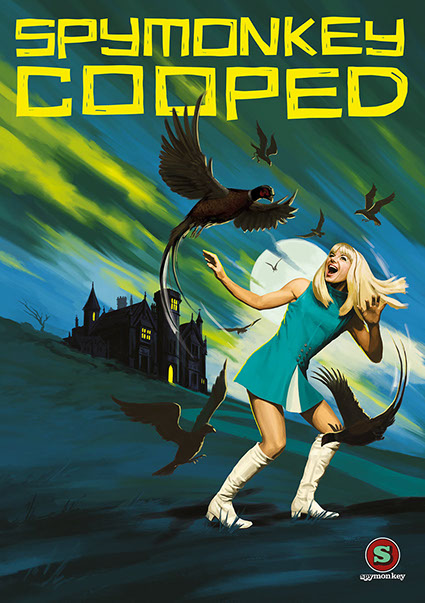 To celebrate our 20th anniversary as ‘the reigning monarchs of physical comedy’ (The Age Melbourne), Spymonkey are offering an unmissable opportunity to enjoy  one of their favourite shows, a deliciously demented take on the pulp gothic romance: Hitchcock’s Rebecca meets The Pink Panther.

“One of the funniest pieces of theatre you will ever see, performed by four of the greatest clowns working in Britain.” Time Out

Overflowing with brilliant characters, rip-roaring farce and virtuoso physical comedy, this is the show which made Spymonkey an international comedy sensation from Just For Laughs Montreal to Sydney Opera House.

COOPED will be touring in the US from autumn 2019 under the new title of 'HYSTERIA'.

A spooky mansion, a plucky young heroine and a handsome English aristocrat. Add a German butler and a Spanish soap star and you're... COOPED with Spymonkey!

Beautiful, fawn-like Laura du Lay arrives in the heart of darkest Northumberlandshirehampton to take up a post as secretary to the reclusive (but devastatingly handsome) Forbes Murdston. She has ignored for as long as she can the unsettling rumours that surround her new employer and his ominous manservant Klaus. If only Roger Parchment, the family lawyer, were not so obviously in love with her! Then she could confide in him her darkest fears:

Is Forbes really the killer who lurks in the darkness? Who is the prey he seeks? And will Inspector Detective Judadench solve the mystery before it is too late?!

Directed by Cal McCrystal, the comedy genius behind the National Theatre’s One Man Two Guvnors.

“Shriekingly, helplessly hilarious. For all their gleeful, larky enjoyment wafting across the footlights like a blessing, these are serious virtuosi” The Times

5 STARS ‘One of the funniest pieces of theatre you will ever see, performed by four of the greatest clowns working in Britain today’ Time Out (UK)

4 STARS “Shriekingly, helplessly hilarious... Consummately executed... For all their gleeful, larky enjoyment wafting across the footlights like a blessing, these are serious virtuosi” The Times (UK)

“So funny it would be ridiculous to miss it... There are puns, sight gags, a disco song, a peerless parody of Crouching Tiger’s martial magic and a nude pastoral dance that made me laugh so much my throat hurt.” The Times (UK)

“Utterly infectious... a perfectly paced hybrid of The Pink Panther and Psycho” The Independent (UK)

“Imagine Mills & Boon rewritten by Monty Python. Or the Muppets doing a cover version of a trashy American Gothic soap. Fling in a fig leaf or three and some brilliantly ditsy clowning and whey-hey! You’re close to being Cooped with Spymonkey... SEE IT!” The Herald (UK)

"Grannies blushing at the naughty bits, kids hooting with laughter, twenty-somethings on a date holding hands and grinning, teenagers from the local sixth-form colleges clutching each other in glee.” Total Theatre Magazine (UK)

5 STARS "It is simply not possible to have more fun at the theatre than this. Just go to see Spymonkey and laugh. That’s all that needs to be said. Go. See them. Laugh. A STAGE 'MUST-SEE' EDINBURGH FRINGE.” The Stage (UK)

5 STARS “One of the best, most hilarious shows seen on the Fringe, Cooped is not to be missed. Almost made me lose control of my bladder” Metro (UK)

ILLUSTRATION BY THE RED DRESS

ILLUSTRATION BY THE RED DRESS