Forbes Murdston, the great tragedian, has suffered writer’s block for years. But now at last he has his own personal tragedy to draw upon. After the loss of his wife Morag, he is driven to express the depths of his sorrow by gathering around him an enthusiastic (but totally incompetent) troupe of actors to produce a moving tribute to his dear, departed love. Mr Keller the embalmer, Alfredo Graves the pall-bearer and Mandy Bandy the make-up artiste are determined to make a night of it.

‘‘You'll weep, but only with laughter’’ The Guardian

Stiff is a study in subtle outrage, dancing a reel on that excruciatingly funny spot just beyond the pale. Since its creation in 1998 it has delighted audiences and critics around the world, and has rapidly become a modern comedy classic.

‘‘I nearly died laughing’’ The Times

‘‘the most fun anyone has found in the undertaking business since Evelyn Waugh wrote The Loved One’’ Houston Chronicle, USA

It has been rapturously received around the world from Mexico, Canada and the USA to Syria and Taiwan. In 2000 it won a Total Theatre Award at the Edinbugh Festival, a Houston Press Award for best touring show 2001, and appeared at the US Comedy Arts Festival 2001 in Aspen Colorado, performing alongside Billy Crystal and Steve Martin. At Edinburgh 2001 it was performed as part of the British Council showcase of the best of British theatre.

‘‘Deliriously funny - credit this young European troupe with impeccable taste in influences and a skill to match the originals’’ Globe & Mail, Canada

"* * * * This is a tragical tale and you'll weep, but only with laughter… On the evidence of this endearing, inventive show [the company] should have a very long life"

"The smartly silly inventions of a superbly skilful cast levitated me into a state of snickering convulsing and literally teary-eyed happiness... I nearly died laughing"

"Inspired, inventive, irresistible - the most fun anyone has found in the undertaking business since Evelyn Waugh wrote The Loved One."

"* * * * * Dead cert killer hit… This show is a real beaut: perfect punning, gruesome slapstick, the epitome of knockabout farce. The company break moulds with as much fresh originality as Not The Nine O Clock News and Fawlty Towers did in their day"

"Polished and perfected so that it sparkles like a freshly-cut gemstone. Side-splittingly hilarious."

"Tears of laughter... Hilarious choreography... A jewel of black English humour, mining a rich seam of the absurd"

"The spectator can assimilate the essence of human tragedy in spite of the amount of hysterical laughter."

"The body is a clown on stage and illusion brings us back to life."

"Opening the 2002 Taipei Internanal Arts Festival is the rollicking 'Stiff'"

A live DVD of STIFF, recorded at Brighton Comedy Festival 2002, is available on our shop page. 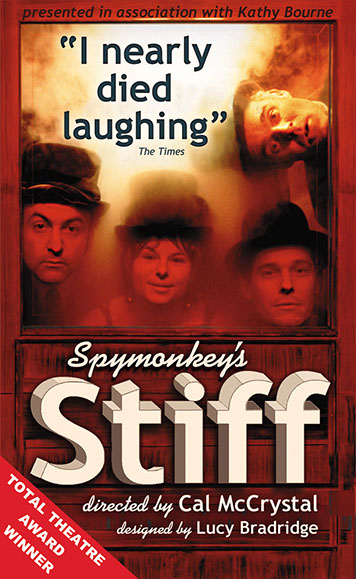